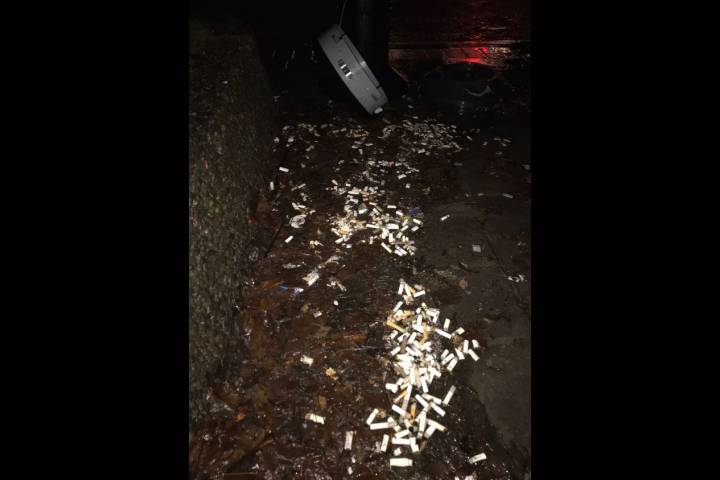 Dozens of cigarette butts were left littered around a designated smoking area (DSA) in Halifax overnight Friday as a result of suspected vandalism.

Halifax Coun. Matt Whitman says he noticed the vandalism, took a photo and reported it to 311. He tweeted a photo out of the damage Saturday morning.

This isn’t the first time a newly implemented DSA has been vandalized. Last month, another one was found ripped off the ground and placed in a garbage can outside the Prince George Hotel on Market Street.

There are currently 80 DSAs across the municipality.

Internal emails, memos and documents acquired by Global News this month revealed that in the first days of the municipality’s amended Nuisance and Smoking Bylaw, there were only nine DSAs installed.

Whitman is also concerned about how well the DSAs are fastened to the ground.

“I don’t think that councillors asked the right questions and I don’t think we got the right answers,” Whitman said. “I feel it was rushed to get something out in time for the national marijuana legalization.”

READ MORE:
Halifax has only one designated smoking area near its busiest hospitals

For more information on the DSA rollout confusion, click here.

—With files from Alexander Quon