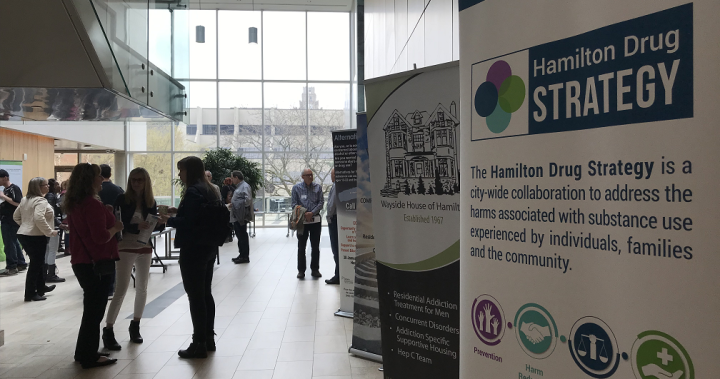 A collaboration of community agencies is launching the Hamilton Drug Strategy to help cut down on the harm caused by alcohol and drug use.

The strategy is made up of more than 100 local agencies and organizations from various sectors, including health care, education, community and social services, corrections and justice.

Its main goal is to ensure that all people in Hamilton are free of harm from substance use. That includes preventing high-risk youth from using alcohol or drugs and keeping other youth from using those things harmfully, as well as improving prevention and treatment for people who are at risk or who have substance abuse disorders.

Dr. Elizabeth Richardson, Hamilton’s medical officer of health, said the idea for the strategy was born several years ago after the Hamilton Addictions and Mental Health Collaborative identified the need for a multi-faceted approach to addiction and drug use. It was also spurred by the creation of a task force to tackle the opioid problem in the city in 2017.

“What we want to do is reduce the harms that people experience that are associated with drugs,” said Richardson. “Whether it’s overdoses from opioids or the consequences of alcohol use that relate to liver damage or to motor vehicle collisions, we want to reduce those harms.”

Part of the strategy to reduce harm involves speaking to people who actually use drugs and have substance abuse disorders, said Richardson.

“The people with lived experience talk about what it’s really like, both to have that disorder, but also what it’s like to interact with the system.”

The strategy is made up of a steering committee and four work groups that focus on prevention, harm reduction, social justice and treatment.

The action plan includes addressing the stigma surrounding substance use.

“We’ve certainly seen in other parts of the world where they’ve worked to change their attitudes about drugs, that we also see reductions in the harms and reductions in use overall,” said Richardson. “It encourages us to think about people as the people they are, rather than as problems or criminals.”

So far this year, paramedics have responded to 300 suspected opioid overdoses in the city, compared to 450 in all of 2018.

A number of those have occurred at the Hamilton-Wentworth Detention Centre on Barton Street. Richardson said there is a significant problem at the jail, which reflects the high rates of substance use disorders in Hamilton.

She said groups involved in the strategy were a part of the inquest into overdose deaths at the jail and the recommendations that came out of that inquest have influenced harm reduction programming.

The strategy will also involve creating substance use prevention modules for local schools and community agencies, improving access to Naloxone kits, promoting safer drug use and increasing support for people with substance abuse disorders that are involved in the justice system.