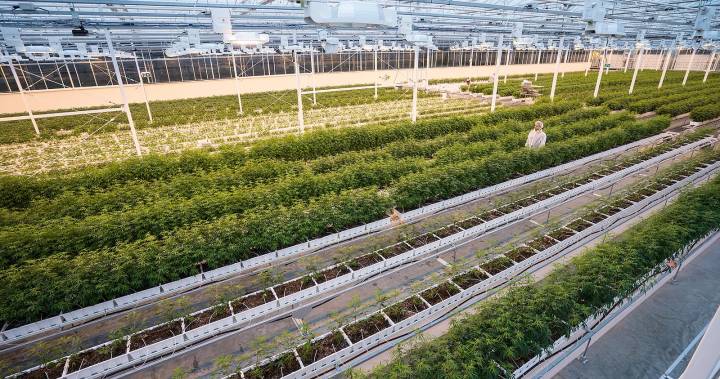 The scent is coming from the Edmonton International Aiport’s new neighbour, Aurora Sky, one of the world’s largest cannabis facilities, which produces more than 100,000 kilograms of marijuana per year.

Aurora Cannabis, the company that operates the facility, is going to great lengths to mitigate any pot odour wafting over to the airport, as well as local hotels and outlet stores.

The facility also has an air misting system and specialized carbon and charcoal filtration units that absorb contaminants and impurities from the air.

“We’re committed to continuous improvement and we do this for a very specific reason — we want to be good neighbours,” said Cam Battley, chief corporate officer of Aurora Cannabis.

The Aurora Sky facility being built by Aurora Cannabis at the Edmonton International Airport on Feb. 5, 2018.

The company said in a December email to businesses in the area that it has heard from a number of people working in and around the airport about its cannabis smell and was working to improve its odour control measures.

The company does daily aroma audits at its 800,000-square-foot facility, Battley said, adding that the smell seems to be strongest at dusk and dawn because of temperature changes during those times.

“One of the things that we’re doing at Aurora Sky is perfecting the technology of odour eradication. We’ve done of a good job of that thus far, because it’s a closed a system and we control air flow,” Battley said.

“However, we have noticed that we still have a ways to go to perfect this technology, not just behalf of ourselves, but on behalf of the industry.”

The Aurora Sky facility being built by Aurora Cannabis at the Edmonton International Airport on Feb. 5, 2018.

Christopher Chodan, spokesman for the Edmonton airport, said it has received a handful of complaints since Aurora started production.

“We shared these with Aurora and will continue to monitor the situation and work with Aurora as appropriate,” Chodan said in an email.

Abigail Alfonso, marketing and tourism manager for the Premium Outlet Collection mall nearby, said there have not been any complaints from customers, retailers or employees.

Officials with Leduc County did not reply for requests for comment.

Battley said a common misconception is that the smell of cannabis can cause impairment.

“What people are smelling is not the cannabinoid — the active pharmaceutical ingredient in cannabis,” he said.

“In fact, it’s the terpenes, the aromatic compound that gives each strain of cannabis its particular smell and taste.”

Terpenes will determine the notes of the cannabis’ smell and flavour, such as a citrus note, from limonene, which gives an elevated mood, a floral scent, from linalool, which can be sedative, or an earthy smell from humulene, which can be anti-inflammatory, according to Leafly.

WATCH BELOW: Sativa or Indica? THC or CBD? Canadians can now legally buy cannabis, but with dozens of different types, how do you choose?

The company will use the methods to minimize the smell as needed in those facilities, Battley added.

WATCH BELOW: (Files from February 2018)  Aurora Cannabis is building a major facility at EIA and is making Alberta’s capital its international headquarters. Tom Vernon reports.