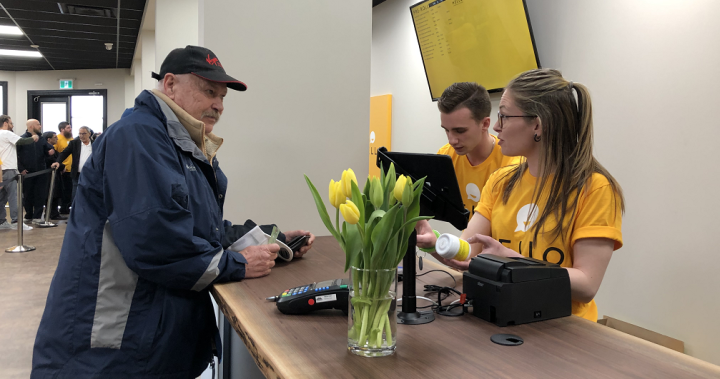 The Hello Cannabis Store, located on Cootes Drive in Dundas, officially opened its doors to customers on Friday morning.

Santino Coppolino, who was one of two Hamiltonians selected in the province’s cannabis retail lottery, said he’s excited to work with Hello Cannabis, which has run a medicinal cannabis clinic in Dundas for years.

“They’ve been in it for a while and they had a pretty good reputation,” said Coppolino, who is getting into the cannabis industry for the first time. “And I needed some help because this happened really quick. And they’ve been consultants and they’ve been very good.”

Stephen Verbeek is the CEO of Hello Cannabis and the lead consultant for the store. He said the store has a diverse staff, selected from 800 applications over a period of a week, and he has told them that nothing ever goes to plan in the cannabis industry.

“The process has certainly not been smooth,” said Verbeek. “But it’s so exciting and such a wonderful opportunity that you do take things in stride, and if you can’t laugh and learn to pivot at some of these things, it’s a very fast way to lose your mind.”

Mayor Fred Eisenberger was at the store’s opening to cut the ribbon and officially declare the store as open. He said he has no doubt that more stores will open up in Hamilton due to the overwhelming demand for recreational marijuana.

“By virtue of the fact that we had about 80 illegal shops in the city of Hamilton, the product is definitely popular,” said Eisenberger. “And now will be much more regulated and much more safe in terms of consumption. So people will know exactly where this comes from. It’s grown in a regulated environment, and then we can tax it, and it can employ people. So now it’s totally out in the open, which I think is a good thing.”

The opening comes less than a week after the city’s first licensed store, Canna Cabana, opened up at the Centre on Barton.

Verbeek said he doesn’t think of the store’s owner, Steven Fry, as competition at all, but is actually very friendly with the Canna Cabana team.

“We have our brand, they have their brand, but ultimately we have the same goal — and it’s to give customers a wonderful experience,” said Verbeek. “And we have a big uphill battle to do that. So we might as well do it together as opposed to against each other.”

The real competition, said Verbeek, is the tenacious black market. There are only two illegal dispensaries remaining in Hamilton — down from 10 a couple of weeks ago, and roughly 80 at peak — but Verbeek said some people are still opting to purchase cannabis illegally because it’s cheaper.

“The products that we have are Health Canada approved, they are tested, there is no leftover fertilizer, many of these products are actually cured. Unfortunately, there is subjectivity — sometimes it’s excessively dry, but you see all of these same problems in the black market as well. The one thing that I do know is you’re not smoking fertilizer and you’re not smoking anything that is contaminated. And I think that is extremely important when you are combusting something in your lungs.”

He added that he’s confident that as cannabis becomes more readily available, the prices will lower and it will become a commodity like any other.

The Hello Cannabis Store is next to The Beer Store on Cootes Drive in Dundas.

The lobby of the store will feature collections of art from local artists.

Customers walking into the store will be greeted by this front desk.

Hello Cannabis CEO Stephen Verbeek speaks with Mayor Fred Eisenberger about some of the products they’ll be offering.

The first customer walks into the Hello Cannabis Store.