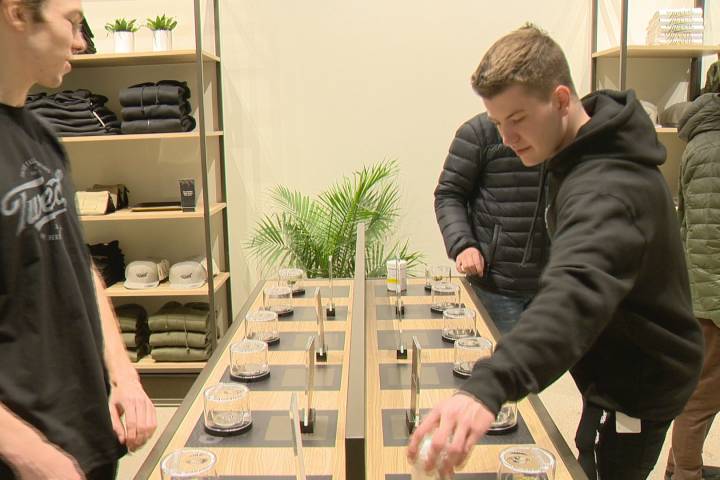 Regina’s third cannabis store opened its doors Dec. 21, and it’s the first franchise retailer to enter the market. Tweed is located at the intersection of Dewdney Avenue and Albert Street.

“It’s locally owned and operated by my mom, Jill, and Tweed has been providing a ton of support,” Tweed project manager Evan Anderson explained.

Anderson said it’s been a very busy five weeks since construction began, remaking a former Rogers store into Tweed. Now everything is up and running, with dozens of customers visiting the store in its first hour.

There are 28 employees at the store and Anderson said all of them have gone through extensive training to help educate customers on how different strains of cannabis may affect them and make informed choices.

Tweed is a brand under Canopy Growth, one of the biggest producers of recreational cannabis. Even with this connection that doesn’t mean the Regina Tweed location is immune to supply challenges faced by the rest of the industry.

“We’ve been taking steps since several weeks ago to really make sure our supply is as best as we can get it,” Anderson said. “Again, it’s not perfect, but we’re working to get it better as it goes. So far we have a lot for today.”

Demand has been strong since Oct. 17. Statistics Canada reports $43 million in cannabis sales in the first two weeks of legalization nationwide.


In this environment, many independent Saskatchewan retailers have said it can be challenging trying to buy against large companies and other provincial regulators.

This is part of the reason why Danny Uhersky, co-owner of Regina based Wiid Boutique, said a total of 18 retailers are looking at forming a co-op to help increase their wholesale buying power.

“We like talking with all the other independent retailers and kind of figuring out how we’re going to survive in the market with companies like Canopy out there,” Uhersky said.

“Part of the reason we want to form the co-op too is to secure some more locally sourced product and really drive the industry for stricter lab testing and better growing practices,” he added.

The interior of Regina-based Wiid Boutique.

Wiid did have to close for a couple of days due to supply shortages. Uhersky said that he was told by suppliers that Health Canada fell behind on its product testing, limiting what could get to market.

Even with plenty of people smoking, police in Regina and Saskatoon have not noticed much change in impaired driving.

“I think I can safely say we haven’t seen a big spike in impaired driving.”

Bray added that most cannabis activity has involved giving people warnings for smoking in public.

“We actually had RPS come and tour the store and he was very optimistic we shouldn’t see issues,” Uhersky said.

Saskatoon police have not seen any cannabis related impaired driving charges. However, they have issued 42 tickets. This includes 12 for minors possessing cannabis, nine for possession/consumption/distribution in a vehicle, and six for possession of illegal cannabis.