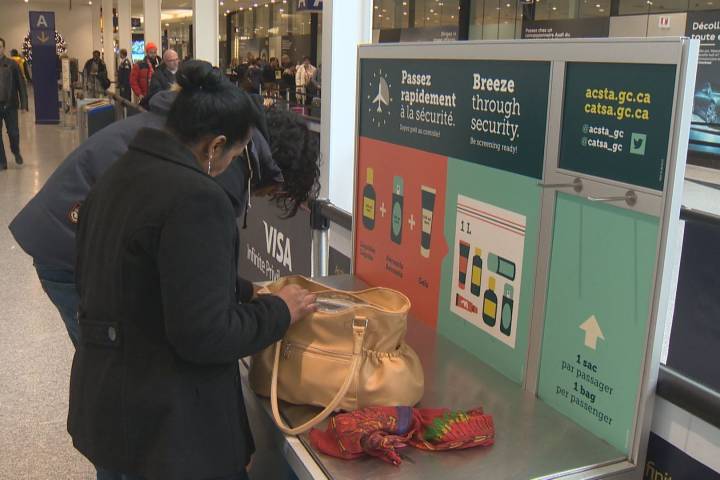 Montreal airport lays out guidelines for flying during holidays, including cannabis rules – Montreal

The holiday season is officially upon us, which means, it’s the busiest time of the year at Montreal’s Trudeau Airport.

“We expect on average 55,000 travelers per day — people that are leaving and coming into Montreal,” said airport spokesperson Anne-Sophie Hamel.

To help speed things up when you pass through the airport, they say there are a few things you can do.

“One way to prepare is to download our app — the CATSA app — it’s available on both iPhone or Android,” said Christine Langlois, Canadian Air Transport Security Authority spokesperson. “You have access to a tool called ‘What can I bring?’”

“You can enter the item you’re planning to bring if you’re not sure and it will tell you if it goes on carry on or checked luggage. You also have access to real-time wait times at 14 Canadian airports, including Trudeau.”

There are the usual items that are not allowed in your carry-on luggage, including knives longer than 6 cm, bath salts and cooking spices.

But there are a few newer rules to take note of this year — the amount of liquids you can carry has slightly changed.

The airport also wants you to know that you can fly domestically with cannabis — but not internationally.

When it comes to flying, 30 grams is the limit for recreational cannabis and 150 grams for medical marijuana, so long as you have your medical papers on hand.

Trudeau airport officials show what approximately 30 grams of cannabis would look like.

“Even if you’re going to another country where cannabis is allowed — it remains illegal to cross international borders,” said Langlois.

To help remind travelers of the new rules, posters have been set up throughout the airport.

What happens if forget to leave your pot at home? You will be asked to leave it in a deposit bin before you get to customs and it will be disposed of by police.