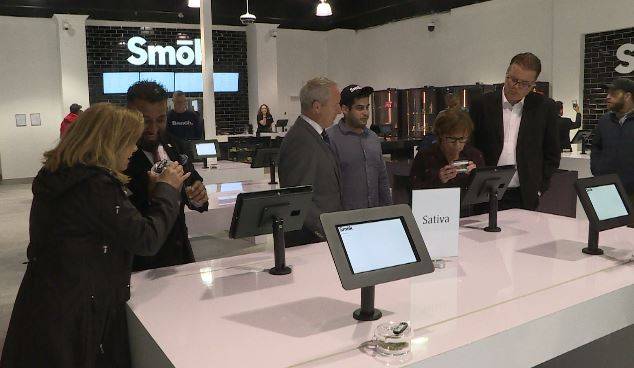 After nearly two months of delays, Durham region finally has its own pot shop.

The store, appropriately named Smok Cannabis, opened its doors Tuesday. Inside, the business gives the appearance of a high-end retail store — a nice surprise to customers in the area.

“It’s a beautiful store,” says Russell Bugg of Ajax. “It’s nice they are starting to make it a lot more accessible anyways, because before you had to go downtown.”

The shop is the first to open its doors in Durham region, meaning customers can now access cannabis in a legal storefront outside of the GTA. It’s a great feeling to customers like Rob Phillips, who says it’s a relief to be able to buy from a legal source.

“I’ve always felt like something of a criminal for smoking, when really I shouldn’t have,” says Phillips.

“Being so long for it to become legal, this is surreal. But this is absolutely wonderful to have something legal,”

It’s really exciting, says Smok owner Alex Altman. “It’s been five months since the initial lottery,” Altman said, “and seeing it from the beginning until now, we finally have the customers coming.”

The delays to get here have been costly, too. Altman tells Global News their $50,000 letter of credit has expired, and they’ve incurred a number of operating costs.

“It was a process with the government and obviously you see the size of the store, construction has its own hurdles with it,” says Altman.

Along with Fabulous Leaf in Oshawa, the cannabis shop is the first of two planned for the region.

Although it’s only one, having the shop in their region is welcome to these residents.

“I think it’s a great thing to have in Durham,” says Tara, a Durham resident. “We’re all adults. People do it in their home, not driving around — there’s nothing wrong with it.”

Altman is hopeful that more shops will be coming down the line.

“There definitely needs to be more than 25,” Altman said. “Twenty-five is a good start.”

Now with nearly 25 shops open for business, the government will look at rolling out their plan for edibles later this year.