Statistics Canada is hoping to expand a study that tests what Canadians are flushing down the toilet in hopes of better understanding how much cannabis people are actually consuming.

The agency tested 15 wastewater treatment plants in five major cities between March and August of 2018, representing around eight million Canadians.


“The benefit of wastewater is nobody escapes. It’s what we call a census, everybody is in there. We have the heavy users and the weekend users,” he said.

Initial results from the pilot project were done before recreational marijuana was legal in Canada and showed Halifax had the highest rates of consumption. 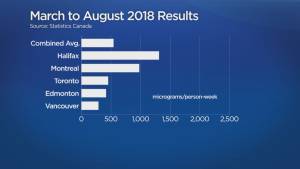 However, researchers are reluctant to compare locations across the country because the results are experimental and don’t take into account the differences in wastewater treatment plants in different cities. The tests also can’t determine the actual quantity of cannabis consumed, or in what form.

READ MORE:
Is alcohol or pot healthier for you? Some Canadians considering switching away from booze


However, Pelusa said the research is beneficial because the tests can be conducted more frequently and at low costs while complementing other methods of measurement like surveys.

“If we know how much is being consumed, it gives us an idea of how much is being produced either in the black market or legally. So, one of the things we are doing now that we haven’t done in the past, is we’re starting to measure the GDP, the economic activity, with illegal activity,” he said.

Wiid Boutique opened in Regina in November and has enjoyed a steady flow of customers ever since. Co-owner Landyn Uhersky said he’s not surprised people under-report their consumption.

READ MORE:
Cannabis IQ: Almost half of Canadian pot users say they use daily. Here’s why regular use is risky


“We see a few walking by the doors or second-guessing coming in or not, but most end up coming in and have a great experience,” he said.

He expects it will take some time, but hopes just like alcohol, Canadians will become more comfortable opening up about their pot consumption.

“I think there were a lot of closet smokers out there and now they can be accepted.”

Statistics Canada plans to expand their study to other Canadian cities including Regina and Saskatoon in the new year.